The Los Angeles based Organization pulled off a successful lower bracket run to win the best of five series over their regional counterparts, Rise.

The Last Chance Qualifier in the North American Region finally comes to an end with Cloud9 Blue rounding off the list of 16 teams who would feature at the Valorant Champions event, to be held later this year in Berlin. The NA LCQ action was temporarily suspended due to technical and health issues building up around the LAN tournament eventually transitioning the rest of the matches to an online mode which resumed on October 28.

The event saw eight teams enter the contention for the lone spot towards the Champions event with the previous list comprising ten as ORDER and Chiefs Esports Club withdrew from the tournament citing travel restrictions due to the ongoing Coronavirus pandemic.

Cloud9 Blue and 100 Thieves were both relegated down to the Lower Bracket by Rise Nation with the Anthony “vanity” Malaspina led side having won their Upper Bracket Quarterfinal match against Version1.

Before taking on Rise, Cloud9 Blue locked horns against 100 Thieves in the Lower Bracket, deemed as the heavy favourites to claim the final Champions spot only to suffer defeat at the hands of the former who maintained a flawless Lower Bracket run in bid to further qualify.

Cloud9 Blue indeed entered the Grand finals with their only shot at redemption to make up for their loss against Rise in the Upper Bracket round as they were finally able to convert their Lower Bracket momentum into a total whitewash of 3-0 over Rise.

The Veto was as follows:

The second half of Breeze saw Cloud9 put up a dominant show, conceding just three rounds to deny Ryan “Shanks” Ngo and co, running away with their map pick. The final score read 13-8 as Cloud9 Blue drew the first blood in the series.

Split was a disaster for Rise as Cloud9 Blue ran circles around them, consistently winning aim duels and outmaneuvering both on the offense and defense. The camp at Rise looked completely destitute and listless as they were unable to secure a round to their name, losing their pick 13-0 in favour of Cloud9 Blue. 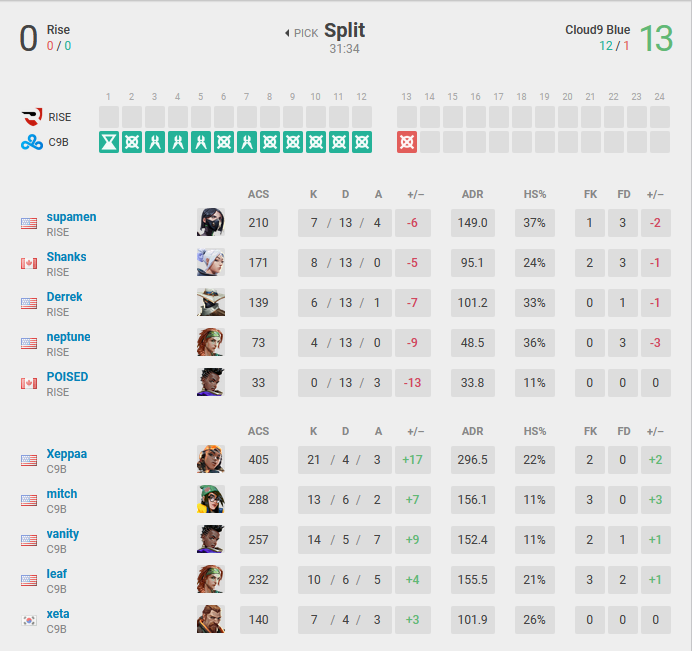 Bind looked much more livelier of all the maps for Rise as both the teams kept trading rounds back and forth thanks to Shanks who aggressively played around with his operator, locking Cloud9 out of the bombsites.

The odds indeed tipped towards Rise, getting a control over the game but were yet again denied by their opponents who never let them plant the spike in the 24th round, running away with the lone spot towards the Champions event and becoming the third team to represent North America at the same.

The Final 16 teams for Valorant Champions:

The Crew 3 is real and an announcement is coming tomorrow