Ruined King: A League of Legends Story is Available Now


Welcome to Runeterra, home to League of Legends’ mighty Champions! The Ruined King: A League of Legends Story introduces players to the deep lore of the League universe. Players will be able to explore the world, navigate through the twisted streets of Bilgewater, and uncover the mysterious dungeons of the Shadow Isles for the first time, playing as six of the Champions we know and love. While the Champions may be familiar, players will get to experience a new fighting style outside of Summoner’s Rift.

Ruined King introduces a fresh take on turn-based combat with the Lane Initiative System. Champions take turns casting lane, instant, and ultimate abilities. Then they will have the ability to use items, as well as passive abilities during combat. The system includes health, mana, an overcharge bar, and a turn order list. Forge different strategies by configuring a party of three Champions and combining their abilities.

In Ruined King: A League of Legends Story, you will unite a group of Champions to protect Bilgewater, a bustling port city that is home to sea monster hunters, dock gangs, and smugglers from across the known world. You will journey to the Shadow Isles, a land cursed by a deadly, corrupting Black Mist which threatens to overwhelm Bilgewater. To defeat the Mist and its mysterious master, players will form an unlikely party of beloved League of Legends Champions – Miss Fortune, Illaoi, Braum, Yasuo, Ahri, and Pyke.

Miss Fortune recently gained control of Bilgewater by defeating her longtime nemesis, Gangplank.  The return of the Black Mist causes her to seek the help of Illaoi and the other heroes. She realizes that she needs Illaoi to defeat the Ruined King, but the two are constantly at odds – mainly over their relationship to Gangplank.

Illaoi is a prophet of the Great Kraken. She uses a huge, golden idol to rip her foes’ spirits from their bodies and shatter their perception of reality. Her journey into the Shadow Isles will challenge her faith–and, at times, force her to wonder if she is doing the right thing.

Braum is a hero from the frozen lands of the Freljord who cares deeply for those around him. Brought to Bilgewater in a shipwreck, having sought out a cure for a village, he fights for anyone who needs help–so he is quickly caught up in the fight against the Ruined King.

In his homeland, Ionia, Yasuo was wrongly accused of a crime and exiled from his clan. To survive, he was forced to kill his brother Yone. Though he has since been exonerated, Yasuo still carries a heavy guilt. He became a lone wanderer and fled to Bilgewater with Ahri. The two of them form a bond, as she looks for clues to his past and he just tries to live up to his promises to her.

Ahri’s a vastaya, but doesn’t know where she came from — or who she truly is. Ahri literally feeds off the emotion of others.  She’s also capable of charming her prey and making her targets serve her command.  Throughout the events of our story, Ahri will uncover her history, and find a renewed sense of purpose in fighting back the mist and creatures of the Shadow Isles.

Pyke was once a sea monster hunter, but was left for dead by his crew during a hunt gone wrong. Now he is a bloodthirsty vigilante who hunts corrupt sea captains for revenge. After Illaoi tests his spirit and finds him worthy, Pyke realizes that the destruction of the world by the Ruined King will prevent him from completing his revenge, so begrudgingly works with the other champs to fight for Runeterra.

Play Ruined King to see what happens when these Champions from across Runeterra put aside their differences to Rise Against Ruin! 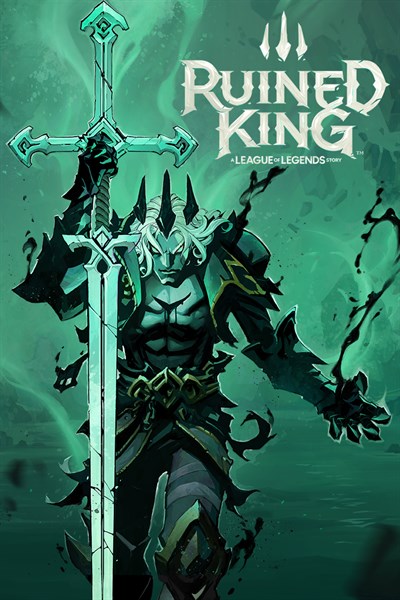 The Standard Edition of Ruined King: A League of Legends Story™ comes with the base game.

Purchase the Standard Edition of Ruined King: A League of Legends Story™ before December 16, 2021 to receive the launch exclusive Manamune weapon for Yasuo.

Unite a party of League of Legends Champions, explore Bilgewater and set sail for the Shadow Isles to uncover the secrets of the deadly Black Mist.

Developed by Airship Syndicate and featuring the art style of legendary comic book artist Joe Madureira, creators of Battle Chasers and Darksiders, Ruined King: A League of Legends Story is the first Riot Forge game that invites you to explore the League of Legends universe. In this immersive turn-based RPG, you will have the freedom to configure your party and control an unlikely group of League of Legends champions, explore the bustling city of Bilgewater and the mysterious Shadow Isles, and experience the Lane Initiative System.
Key Features
An introduction to Runeterra: Start exploring the rich lore of League of Legends and the extraordinary stories of the Champions.
Build your own party: Forge different strategies by configuring your party of champions and combining new abilities.
Experience the Lane Initiative System: Choose your approach for each enemy encounter and change the course of the battle by tweaking the speed of your actions, reacting to environmental events or modifying the effects of your abilities.

FlyQuest Stand Alone at the Top of the LCS

6 games that had a huge impact on PC gaming, but are rarely celebrated today