LoL: Royal Never Give Up vs Edward Gaming


Day Two of the Knockout Stage got underway with two of the tournament favorites, Royal Never Give Up and Edward Gaming, taking to the Rift.

This was one of the closest series on paper of the four Knockout Stage games. RNG versus EDG was set to be a mouthwatering occasion, especially after the 3-0 romp by T1 on HLE yesterday. Both sides went 4-2 in their respective groups, however, RNG’s consistency with their roster could give them that slight edge.

The opening few minutes were quite slow, and with seven minutes gone, no kills had happened yet on the map. RNG had picked up the first drake, as small margins are all that separate the teams. Finally, EDG picked up First Blood a minute later, finding a pick in the top side river after a hectic skirmish. RNG were quickly able to trade that back in the top side in a 1v1. Shortly after, another one-for-one trade, with RNG able to turn it into a 1.5k lead and gain major map control.

The next major plasy were  two back-to-back team fight victories for RNG, picking up four kills across the two fights as they moved on to Soul point by the 17-minute mark. With the Dragon Soul drake on the map, EDG had to do something to stop it. Overall, they won the fight, but lost the drake as RNG picked up a 23-minute Soul. With members of RNG dead, EDG attempted the Baron, but they moved away from the objective in the end. With the sides resetting, RNG were able to take down a member of EDG before moving towards the Baron. The pre-Baron fight went one-for-one, but RNG still claimed the Baron.

With Baron, RNG claimed one Inhibitor and exposed another, but with Elder about to spawn, EDG had to make a final stand. RNG had other ideas, however, as they cleaned up four members of EDG, then stormed down the mid lane to pick up their first win of the series. 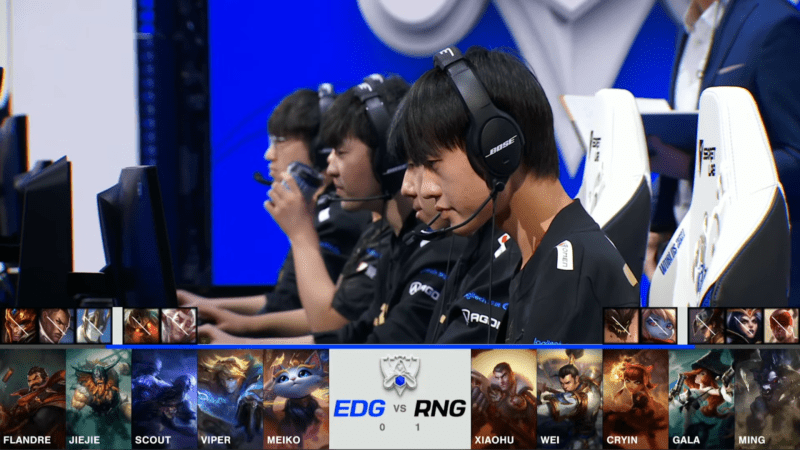 The comeback was on as EDG picked up First Blood, alongside another kill, with just one in return. They picked up a drake and another kill top side as EDG looked to make this into a series. Soon after, there were another three kills and a Rift Herald for EDG as they took a huge 3.5k gold lead before the 10-minute mark. From here, it was pure domination across the Rift for EDG. They swiftly moved to 6k ahead around the time that they secured a second drake.

RNG showed signs of life just a moment later, pushing in the top side, they picked up two kills without return. But EDG was still in the driver’s seat. Just like that, it’s back to normal service, as EDG picked up another three kills as they kept their control on the game. Afterward, EDG managed to secure a massive Baron as they looked to close out the game. With a 7k gold lead, EDG took full control. With Baron, EDG sieged and took down the RNG mid-lane tower and Inhibitor before aiming for the bot side before Baron dropped off.

Baron soon fell off, but EDG forced the issue anyway and pushed RNG into their base. The fight looked to be going the way of RNG at first, but the combination of Yuumi and Graves was able to win it. EDG convincingly took the game and brought the series back to 1-1 as we had a series on our hands. 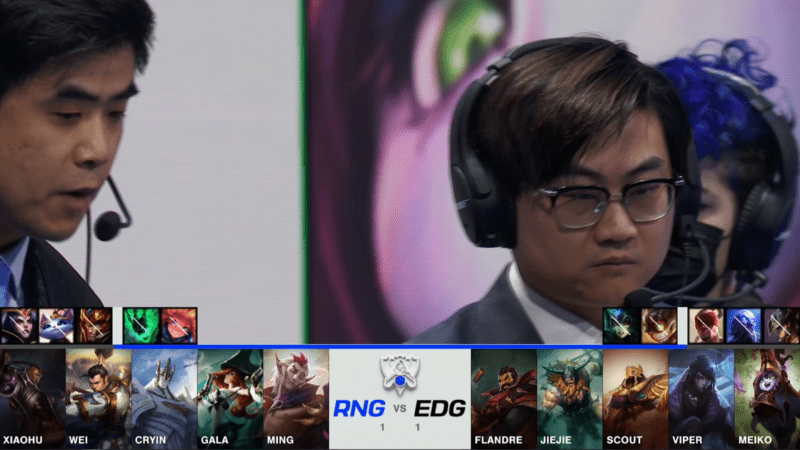 It’s First Blood over to RNG in the top lane when they send three to dive Flandre, as they looked to get an early lead to bounce back after Game Two. Continuing to make Flandre’s life hell, RNG went back to the top side to pick up a second kill before turning their attention to the turret. Things settled down after EDG claimed the first drake and Rift Herald, though RNG kept their 1k gold lead. While no more kills were traded, good map play saw EDG bring down the RNG gold lead a bit as the game moved into the mid game.

During it, EDG picked up a quick double in the top side after a failed 3v3 from RNG, where RNG only claimed one kill in return. With that play, the gold lead had flipped back over to EDG who had moved to 2k ahead. Afterward, there were another two kills for EDG in the river, alongside two towers in the mid lane to balloon their gold lead to 4k. Keeping the ball rolling, kills were traded across the board but RNG was next to grab two more kills.

Seeing their hold slip away, Baron was started by RNG as they looked to gain a foothold in the late game. With EDG pressuring, they took the 50/50, which they threw away as Jiejie Smite stole it. The subsequent fight looked to be going RNG’s way, but EDG made the fight three-for-three. After the Baron, EDG took the Cloud Soul and marched down the RNG bot side. Despite just two members having Baron, they’re able to siege the RNG base and claim an Inhibitor. But RNG were able to defend, as EDG looked to reset.

RNG were able to win the next fight, getting a three-for-one kill trade as EDG struggled to find a way to close it out. Once again, RNG gambled on a 50/50 Baron, and it’s an almost identical play to the one before, with Jiejie jumping in to steal it away. In the ensuing fight, RNG lost three members, which allowed EDG to charge into their base to end Game Three. The win put EDG into a 2-1 series lead as RNG couldn’t recover from the early game loss. 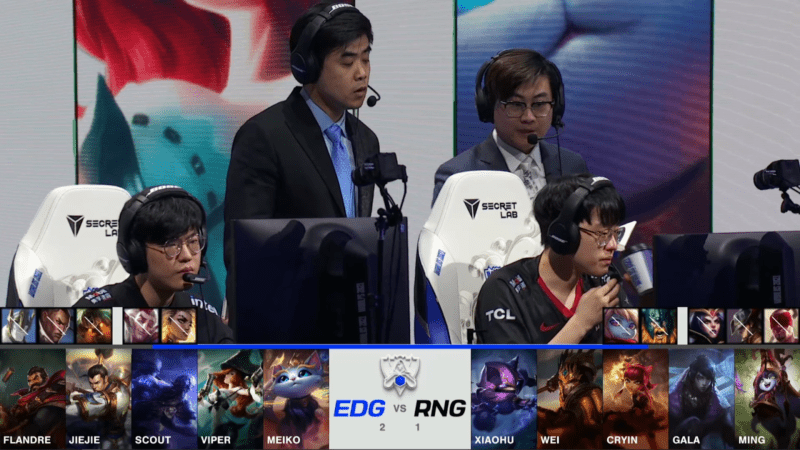 EDG had a great start to Game Four, deciding to invade the RNG jungle at level one. While it wasn’t the First Blood, they did force the Flash out of Wei. First Blood went to EDG later though, and while RNG were able to trade it back, EDG managed to get a second. Rift Herald saw the first big fight which RNG secured, though no kills were traded. It was a 1k gold lead for RNG as the game moved into the mid game.

Here, RNG picked up three massive kills under the EDG bot lane tower. It got even better, as inn the extended fight, RNG picked up the Ace and lost only one in return. RNG turned that into another kill in the mid lane as they secured a 4k gold lead. EDG were able to secure a kill bot side alongside the Rift Herald, but it was instantly traded back. Not backing down, RNG looked to take the series to a fifth game. RNG continued to assert their dominance on this match, moving to 6k gold ahead in a matter of minutes.

RNG continued to find kills, three this time in the EDG jungle as they moved towards Baron. With Baron, RNG pushed into the EDG base, won one last fight and secured the win. The series would go the full five games as both sides looked to stay at Worlds. 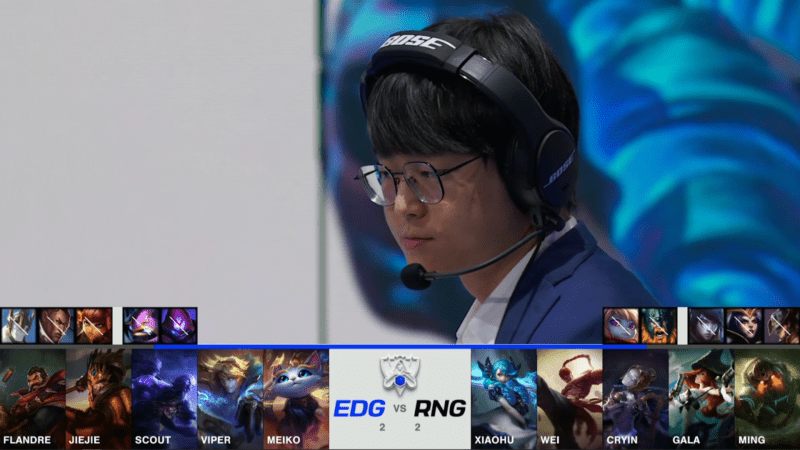 In this crucial do-or-die game, First Blood went to EDG, but two kills were traded over to RNG as we left the play on equal gold. EDG picked up a kill bot side in the next play, as they managed to move 1k gold ahead. Even after a few kill and objective trades taking place all over the map, EDG held on to their gold lead. A top lane Rift Herald for EDG pushed their lead even further ahead in this series-deciding game.

EDG dominated the mid game, after having a great early game. Fairly quickly, EDG moved to 5k gold ahead as RNG looked completely washed away. EDG pushed RNG towards their base and started to starve RNG out of the map as the lead was maintained at 6k. EDG secured the top lane outer turret, with RNG forcing an engagement and claiming a kill. The lead was 7k gold still, with EDG looking in full control. With Baron available and a kill secured, EDG moved to claim the objective. The Baron was secured with little issue as EDG looked to end.

With Baron, EDG began a siege on the bot side. RNG were forced inside the walls of their base, desperate to find an in. The mid lane Inhibitor was soon secured, then a fateful team fight erupted. Four members of RNG were obliterated and EDG were able to secure the Nexus. They finally get a series victory over RNG and will to face T1 in the next round.

Forza Motorsport reportedly delayed to ‘Q3 or later’ this year