One series left to decide who will meet DWG KIA in the Grand Finals.

After an incredible match between DAMWON and T1 yesterday, it was Edward Gaming’s and Gen.G’s turn to take to the Rift. The Korean underdogs Gen.G were certainly swinging up in this match, though the LPL Champions EDG have shown they can bleed before it. However, regardless of expectations, both of these teams wanted nothing more than to claim a spot in the Worlds 2021 Grand Final. And they had to pull out all the stops to achieve that goal in this Semifinals match!

Game One delivered a very close game with some interesting picks, like the team fighting Seraphine mid and the split push-focused Jax. But the early game was defined by the bottom lane. EDG’s Lucian-Nami lane was monstrous, as they killed Ruler for First Blood, though traded over a kill when GEN members reacted. That didn’t discourage Viper though. He kept up the pressure and killed him a couple more times in the isolated 2v2. GEN found crucial picks onto Meiko and Jiejie to keep things fairly even.

Moving into the mid game, Viper was strong and EDG was ahead in neutral objectives. Despite that, they had a few missteps. They stumbled in two team fights, one at 16 minutes the other at 20 minutes, where GEN capitalized on Viper’s mispositioning to gain six kills altogether while only trading three back. After this second fight, they even claimed a Baron buff. Unfortunately for GEN, they really couldn’t get much done with this Baron.

So the game went on. And it was another pick onto Viper that caused a 28-minute team fight, which resulted in two kills to GEN, along with a second Baron. GEN were in a good spot now, but EDG set up around the bottom river to secure the Mountain Soul, drawing them in. GEN did contest, and this time Viper popped off, leading his team to get two kills and the Mountain Soul.

Two minutes later, disaster struck for GEN again. EDG found a huge pick onto Clid, then caught out Rascal too when he Teleported in. As a result, EDG knocked down two towers and an Inhibitor. At 35 minutes, EDG won another team fight with a one-for-zero kill trade, which netted them the Baron. Finally, the teams met at the all-important Elder Dragon. That is, besides for Flandre’s Jax, who rushed down the mid lane. While a hectic team fight erupted around the dragon, Scout Teleported in to join Flandre, smack Rascal aside and backdoor the Nexus to win the game. 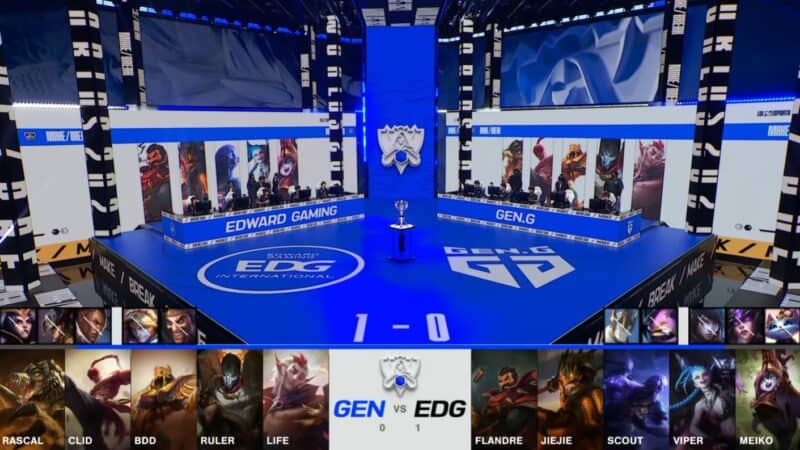 After a disappointing loss in Game One, GEN came back out swinging in Game Two. Though EDG kicked off the action by sending three to dive and kill Rascal, GEN controlled the majority of the early-mid game. They took a Rift Herald, a Mountain Dragon, and Rascal even clawed back from his deficit to solo kill Flandre. In addition, Clid ganked and killed Viper, then helped his team grab a kill in a mid lane skirmish.

With this early lead, GEN secured the First Tower bonus and knocked down a few other towers. While EDG did manage to trade back a few, GEN secured two more kills before 20 minutes to cement their lead. Post-20 minutes, there were a few more towers traded, but no game-breaking fights or plays for a while. There was a Baron attempt from GEN at 25 minutes but they smartly backed away when EDG showed up to contest.

Finally, the fight everyone was waiting for. At 27 minutes, a team fight broke out around the mid lane and went into the jungle, where GEN chased down and slaughtered four from EDG. They rushed mid to end the game, but with EDG members respawning, they couldn’t quite manage to. Off of the GEN base timers, EDG tried to rush the Baron, but Clid Smite stole it away, taking all hope from EDG. Afterward, GEN cut down all five EDG members before taking a Nexus kill, and a game win, of their own. 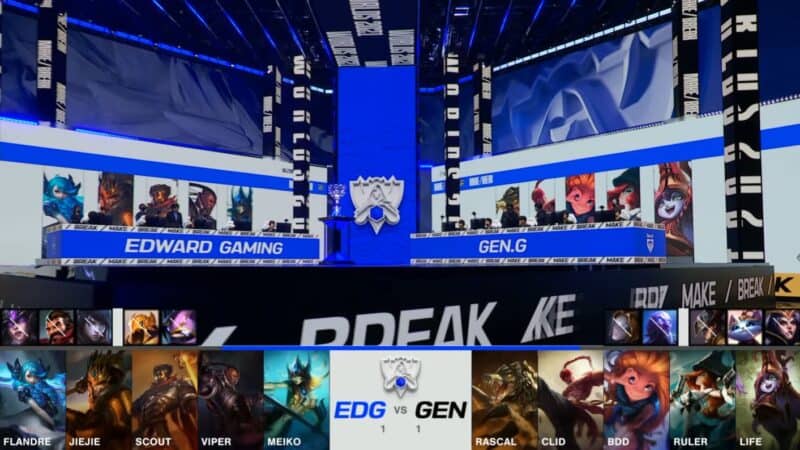 Tied at 1-1, both of these teams wanted a win here to bring the series to match point. It was GEN who found First Blood though, as they sent three members top to gank and kill Flandre. After that, a one-for-one trade happened in the bot lane 2v2, with both supports getting a kill. However, the first real fight broke out at eight minutes near the Rift Herald. GEN secured the objective, then forced onto EDG to pick up two quick kills. With the help of the Herald, GEN claimed the First Tower bonus mid too.

The GEN lead was real, and they weren’t letting go of it. Moving into the mid game, they found more kills and many more towers. Although, like before, EDG did trade towers back, though not as many as GEN took. But after Baron spawned, the game slowed down. That was until 26 minutes, where GEN pushed the top Inhibitor down while EDG tried to make a push mid. Catching EDG with their pants down, GEN rushed the Baron. But EDG was quick to pull it back together, getting two kills and forcing GEN off the objective.

After this, there was more downtime. The Baron spurred the next action at 31 minutes when GEN simply decided to rush it down. They secured it this time, though lost three of the buffs in the ensuing team fight. This was crucial, as GEN wasn’t able to do lethal damage to EDG’s base. Especially when EDG caught Bdd out. Because of this defence, it all came down to the Cloud Soul. Here, EDG rushed it down and claimed the fourth dragon. But GEN didn’t mind giving it over, as they ran down EDG and killed three of them off the rip. Seeing their opportunity, GEN rushed down mid and ended the game after a few more kills. 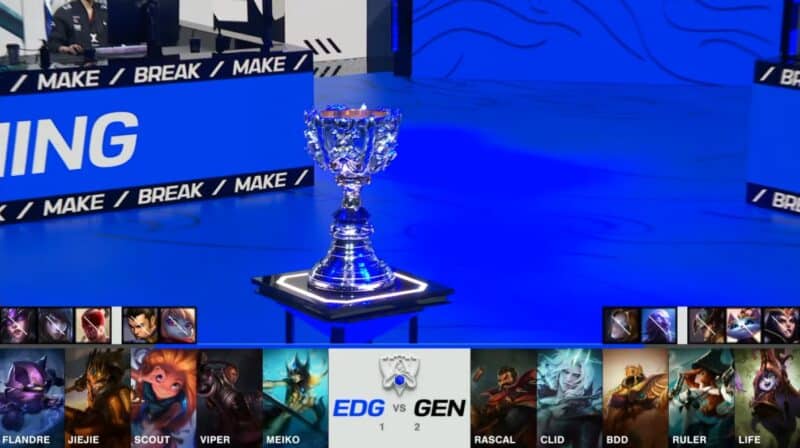 On match point, GEN had to just win one more game to claim a spot in the Finals. But it was EDG who started off strong this game, as a 2v2 between the mid laners and junglers resulted in a two-for-one kill trade in favor of EDG. Scout was huge from this since he picked up both kills too. After that, EDG took a Herald, though Clid found a play in the top lane to kill Flandre. The early game domination from EDG was real, as they even four-man dove the bot tower at 14 minutes to get a kill and the First Tower bonus to boot.

While EDG had a lead, it didn’t look completely over for GEN yet. That was until 16 minutes, when at the dragon pit, EDG picked up four kills in a crucial team fight. From here, it was all EDG all the time. Though Clid consistently out-Smited Jiejie to get three dragons, at each dragon fight, EDG came out ahead in kills and gold. Finally, at 27 minutes, EDG managed to keep Clid away from the pit and EDG claimed their first dragon, stopping the GEN Soul. Afterward, they killed four members and snagged a Baron buff too.

With the Baron, EDG swiftly brought down multiple towers and the top lane Inhibitor. Scout’s super fed Zoe then one-shot Ruler when he tried to defend the middle Inhibitor Tower, meaning a second Inhibitor fell. In the 5v4, EDG was confident enough to keep pushing towards the Nexus Towers. GEN tried desperately to defend but fell one by one. EDG smashed GEN’s Nexus and brought this Semifinal match to Game Five. 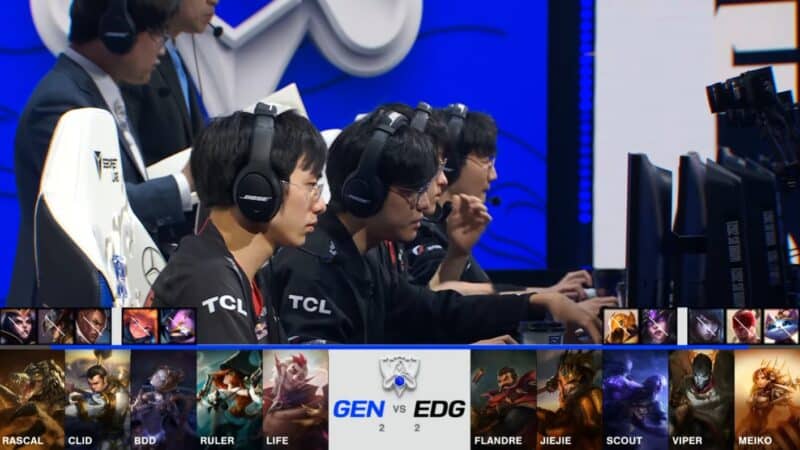 After the traditional round of Silver Scrapes, the deciding match began.With tournament lives on the line, it was Jiejie who made the first move. At five minutes, he ganked Bdd to set up Scout for First Blood. A few minutes after that, he moved to Herald, taking that, then dropping it bot lane for a few plates. During this bot lane play, GEN tried to force a fight, but it was EDG who walked away with a kill.

At 14 minutes, both teams met at the bot lane again for another big fight. Here, EDG once again gained the advantage after a three-for-one kill trade in their favor. It kept getting worse for GEN, as even though they stole a Herald away from EDG, they couldn’t pick up the eye and lost a member. A short while after that and the Baron was on the map, which EDG was keen to get. At 23 minutes, a team fight erupted at the dragon pit, where EDG once more dominated GEN. They cut down all five GEN champions before taking the dragon, as well as the Baron.

The top lane Inhibitor fell to the first Baron siege, while a few more towers were knocked down too. Eventually, a team fight broke out in the middle lane, where EDG took two more kills then the Cloud Soul. It seemed this series took its toll on GEN, as Clid was picked off in a terrible spot, which allowed EDG to claim a second Baron. Under the weight of a huge gold deficit and the Baron empowered siege, GEN simply couldn’t hold on. EDG rampaged through their base, picked up more kills and a Game Five Nexus destruction.

With this loss, GEN is eliminated from Worlds 2021. Meanwhile, EDG, LPL’s first seed, will take on the LCK’s first seed and reigning World Champions DWG KIA in the Grand Finals.

Video: Learn About The Making Of GoldenEye 007 In This “Leaked” Rare Replay Documentary

How to join Voice Chat in Overwatch 2

Video: Learn About The Making Of GoldenEye 007 In This “Leaked” Rare Replay Documentary