How To Watch FNCS Season 8 Semi-Finals, Reboot Round & Finals


ESTNN breaks down everything you need to know about this weekend’s FNCS Season 8 Semi-Finals, Reboot Round and Finals.

The time has come to crown Fortnite’s Chapter 2 – Season 8 Axe of Champions winners. For only the last two weeks, players worldwide have competed in a pair of qualifiers to either guarantee themselves a spot in the Season 8 Finals or qualify for the Semi-Finals through Series Points. For the latter, the path became much more challenging and unpredictable.

Nonetheless, this shortened Fortnite Champion Series (FNCS) meant a sprint to the finish for all participants. The FNCS Semi-Finals, Reboot Round and Finals will occur across the next four days. This Sunday, competitive Fortnite will crown its Season 8 Champions.

Today, ESTNN provides a viewing guide to help you understand what’s happening this weekend as we inch closer to the end of Fortnite Chapter 2 – Season 8.

The first two days of this accelerated FNCS conclusion are the Semi-Finals, also known as heats, and the Reboot Round. Qualified semi-finalists are competing for a top-four finish to push them directly to the Season 8 Finals. The remaining teams will compete in the Reboot Round, where only Victory Royale winners secure a spot in the Season 8 Finals.

Following the Semi-Finals and Reboot Round is the Season Finals. Teams will compete in 12 matches to determine the final placement of the leaderboard. As the last few FNCS Finals, Epic Games committed a $3M USD prize pool to cover all seven regions. All in all, it should be an insane, fast-paced sprint to the finish line.

Here is a quick recap of the format for the next four days: 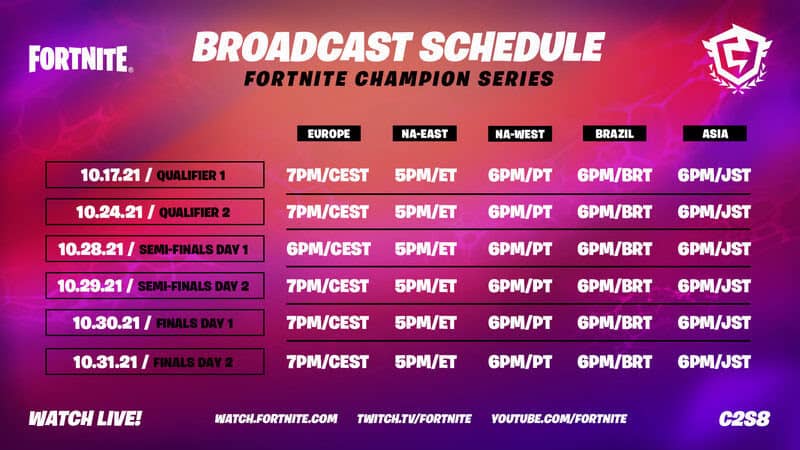 There is no shortage of viewing options for the FNCS Semi-Finals, Reboot Round and Finals this weekend. Many of the world’s top players will broadcast their points of view. Additionally, Epic Games hosts an official broadcast with many talented casters and analysts on the call.

Several well-known community members stream viewing parties as well to give a deeper insight into the storylines happening in each match. Your best bet is to browse Twitch’s directory and find streams that suit your needs.

Here is the complete broadcast rundown for the next four days of FNCS Season 8: 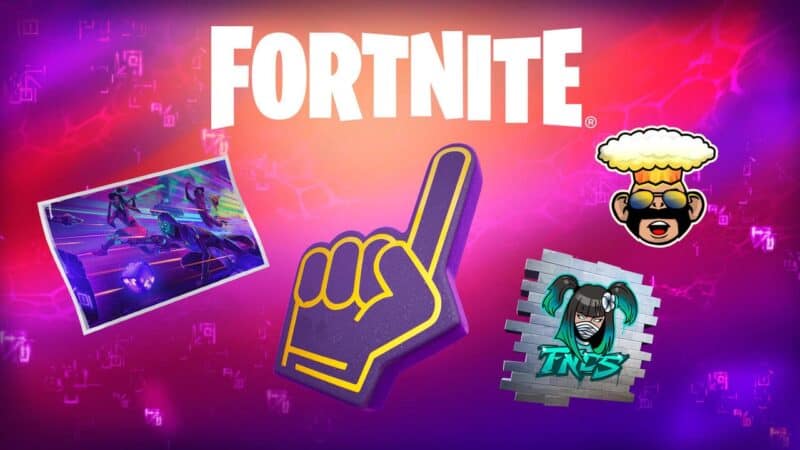 FNCS Twitch Drops are still live in Season 8. Players thus far should have collected the emote, spray and foam finger back bling for tuning in and following the instructions. This weekend marks your last chance to acquire these Twitch Drops.

Anyone looking to acquire these cosmetics needs to watch a verified broadcast for at least 15 minutes and then claim the drops on Twitch. Make sure that you link your Epic Games account to your Twitch account to be eligible.

Be sure to tune in throughout the weekend to see which trios become the FNCS Season 8 Champions. Stay tuned for more updates regarding the Fortnite Champion Series and other competitive Fortnite events!

How to Damage Guardian Shield in Fortnite? » TalkEsport

Dragon Ball locations in Fortnite: Where to find all 7 Dragon Balls

What’s the effect on Roadhog, Sojourn and Kiriko?

Sherlock Holmes: The Awakened invites you to cross-examine the creepiest evil doll I’ve ever seen